Informal Retail in Africa: Could Technology be the Key Enabler?

Since the turn of the century and consistently for nearly a decade before the COVID-19 pandemic ravished global markets, Africa was home to the fastest growing economies. The shoots of positive growth it demonstrated afforded it the title of the “last frontier” for businesses seeking growth opportunities in an otherwise flattening global growth context. As COVID impacted the globe, so too were Africa’s short and medium-term prospects for growth. However, a common theme has always been that Africa should be approached with a long-term lens, and this notion holds true today, more than ever, in the wake of the pandemic.

As African markets slowly rebound, the pace of which has been severely hampered by impediments such as access to and the roll out of vaccines, what we can all be certain of is that opportunities for growth remain, with some key drivers underpinning long-term growth, such as rapid urbanisation, a fast-growing young population, and improving prosperity. For the retail sector, one of these growth opportunities lies in Africa’s large and significant informal sector, which is often difficult to comprehend, and indeed, navigate.

Informal Retailing is significant and evolving

The informal retailing channel makes up 67% of total retail across Kenya, Nigeria and South Africa (Euromonitor 2019). This contribution, although skewed slightly by South Africa’s highly developed modern retail channel, still points to the importance and significance of the informal retail market in major African countries. When looking broadly across African markets, a United Nations Economic Commission for Africa (UNECA) report estimates that the African retail market is characterised by approximately 90% of transactions occurring through informal channels – this figure is estimated to be 96% in Ghana, 98% in Nigeria and approximately 70% in Kenya. 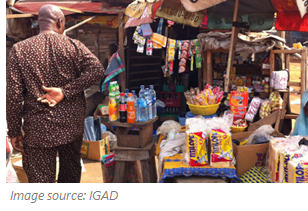 The size of informal retail signals an opportune gap for formal retailers to capture increased market share, particularly as mega shifts such as rapid urbanisation and closing infrastructure gaps take shape in key cities across Africa. Although the opportunities are clear, formal retailers are faced with several challenging considerations that will ultimately determine the pace at which retail markets formalise over time. These challenges include:

However, perhaps it is less about how fast or when markets will formalise, and more about how stakeholders can understand, collaborate with, and penetrate the informal sector. 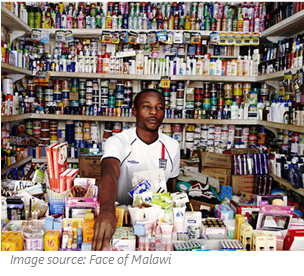 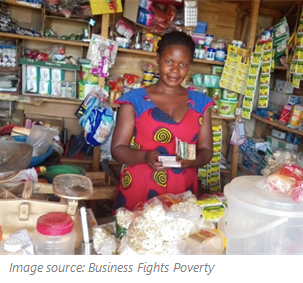 It’s all in the how

Africa is renowned for leapfrogging technology advances. This rapid technology adoption by Africans, where inclusive innovation is making various technologies accessible to more people across the continent, will be a key growth driver for the future role of retail. Innovations such as MPESA, a mobile wallet provider in East Africa that now has 50 million users, have revo-lutionised financial services long before the term ‘fintech’ was even broadly used to describe payment and other financial solutions enabled by technology. 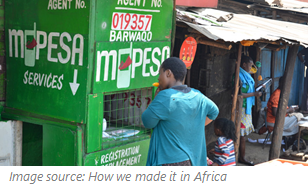 Mobile commerce could unlock the retail sector and deliver omni-channel growth. The proliferation of mobile phones and the cost and shortage of retail space infrastructure, coupled with consumers’ increasing need for con- venience, could see many more retailers adopting omni-channel solutions to compliment the store networks they have in place.

In 2021, the estimated mobile internet pene-tration in Africa amounts to 40%. Its reach is projected to reach 51% in 2025 (Source: Statista). Kenya has an internet penetration of over 85%, driven mainly by the fact that it is the home of MPESA. Statista reports that by October 2020, “the majority of web traffic in leading digital markets in Africa originated from mobile devices – in Nigeria, one of the countries with the largest number of internet users worldwide, 74 percent of web traffic was generated via smartphones and roughly 24 percent via PC devices”. The large penetration of web traffic via mobile phones is in part since mobile connections are a lot cheaper and require less infrastructure than desktop devices with fixed-line internet connectivity.

According to a MediaCom article, “280m Africans shopped online in 2020, compared to 45m in the UK for example – call it 2.2% of Africans vs. 81% of people in the UK”. Although this may suggest a lag, the numbers do not necessarily account for what may be classified as informal e-commerce activity. 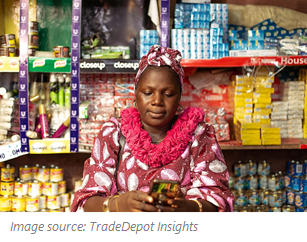 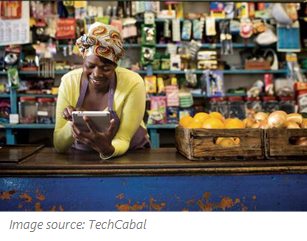 Inclusive technology, such as WhatsApp, is un-locking fulfilment opportunities for shoppers and informal traders in an evolving ecosystem. Traditional e-commerce players that are ignoring households in informal settlements such as Gugulethu in Cape Town, Kibera in Kenya, or Makoko in Nigeria, are potentially missing out on millions of users.

Technology start-ups are emerging to take advantage of these opportunities. Kuueza, an Accra-based start-up and digital hub, enables businesses in both the informal and formal sectors to trade and build their value chains locally and beyond borders. The start-up aims to “make sure that African micro, small and medium businesses can trade more with one another as well as enter new markets such as the United States and Canada”. The technology connects buyers to sellers, retailers to consumers and manufacturers to retailers using a mobile and web app customised for the informal sector. One of their user cases is connecting local farms to a consistent supply chain that helps them sell their produce to stores and supermarkets in the cities

In conclusion, what is exciting about this aspect of Africa’s retail story is that there are three big forces converging which will drive the sector forward, i.e., a large and significant informal sector, Africa’s people and the entrepreneurial spirit that underpins this sector and the traders that keep it alive but also is unearthing the desire to develop innovative solutions, and technology, the key enabler which could unlock the opportunity for all stakeholders.

Look out for Trade Intelligence’s first Retail in Africa Special Report where we unpack the importance of the informal retail sector and its role as one of the key themes shaping retail in Africa.